Value of Starcitygames premium for $50 for a year? If you want to preview premium the articles and videos become available 30 days after they were released. We cannot accept PayPal or StarCityGames.com gift cards and/or store credit for Premium memberships at this time. Last updated on August 30, 2018 Related Articles.

The collectible card game Magic: The Gathering has released compilation sets, reprint sets, and box sets over its history. These are distinct from core sets and expansion sets, the most heavily marketed sources of new cards. With the exception of Chronicles, reprint sets generally do not affect tournament legality in supported formats; for example, cards reprinted in the Modern Masters reprint set, while legal for tournament play, did not necessarily cause the card to be included in the 'Standard' environment. (If a card happened to be in Standard due to a separate reprinting, though, all 'versions' of the card automatically become legal, including ones from a reprint set.)

The official YouTube Channel of StarCityGames.com, the world's largest Magic: The Gathering retailer! Your source for Versus Live! Archives, match replays fr.

The paper Masters series consists of:

Booster boxes of the Masters series generally contain only 24 booster packs, compared to a regular expansion containing 36 packs, with the intent that they be used for an 8-player Limited draft. Basic Lands, which are present in most expansion set booster packs, are absent in the Masters sets. Instead, a premium card (foil), which traditionally existed in a common card slot on random basis, is included in every pack.

Modern Masters is a set that consists of reprints of cards which are legal in the Modern format. Modern includes all cards from Eighth Edition onwards, barring a small number of banned cards. The first Modern Masters ('MMA') was released on June 7, 2013. It has 229 cards (101 commons, 60 uncommons, 53 rares, and 15 mythic rares) ranging from Eighth Edition through Alara Reborn. The set was released in the English language only.[4] The original Modern Masters distribution was highly limited and Wizards of the Coast stated they would not like to release as much as they did with Chronicles.[5] Wizards of the Coast eventually loosened this, and printed considerably more of the 2015 and 2017 editions of Modern Masters. Notable reprints in the original Modern Masters included Dark Confidant, Tarmogoyf, and Vendilion Clique.

The second set, Modern Masters 2015 Edition ('MM2'), was released May 22, 2015. It has 249 cards (101 commons, 80 uncommons, 53 rares, and 15 mythic rares). In addition to the blocks in the original Modern Masters, the 2015 edition features cards from Zendikar block, Scars of Mirrodin block, Magic 2010, Magic 2011, and Magic 2012. The set was released in Japanese and Simplified Chinese in addition to English.[6][7] Twenty to thirty cards feature new artwork, and a number of new tokens are included.[7] The English booster pack in Modern Masters 2015 Edition used recyclable paper cardboard as packaging material instead of foil packs, the first set doing so in Magic history. It also raised some complaints of easier theft of the cards, however.[8] Notable reprints in Modern Masters 2015 Edition included Bitterblossom, Emrakul, the Aeons Torn, and Karn Liberated.

Eternal Masters is a Magic compilation set released in June 2016. Similar to the Modern Masters sets, it reprints cards, but from all of Magic's history rather than restricting itself to the Modern format, thus aiming itself at casual formats such as Cube as well as the Vintage and Legacy formats.[9]

Modern Masters 2017 Edition ('MM3') was released on March 17, 2017. It was also released in English, Simplified Chinese, and Japanese. The 2017 edition added Innistrad block, Return to Ravnica block, Magic 2013, and Magic 2014 to the sets eligible for a Modern Masters reprint. Notable reprints in Modern Masters 2017 Edition included Tarmogoyf, Damnation, Liliana of the Veil, Snapcaster Mage, Voice of Resurgence, and the enemy color 'fetchlands' such as Scalding Tarn.

Iconic Masters is a Magic compilation set; it was released at Hasbro's HasCon's 25th anniversary celebration of Magic in September 2017, and released to the wider public in November 2017.[10] It is a compilation set with reprinted cards originating throughout the history of Magic, similar to Eternal Masters.[11] The set is generally perceived to have had poor sales due to the two month delayed nature of its wide release, which happened only a few weeks before the release of Unstable. Wizards of the Coast would later apologize for setting wrong expectations for the set as well as the strange scheduling after receiving negative feedback about the set.[12]

Ultimate Masters (UMA) is scheduled to be released on December 7, 2018 in both English and Japanese. In the official announcement, it was noted that the set will have an unusually high price point, but also unusually high value reprints.[3] Wizards of the Coast has declared this will be the last Masters set for some time.

Anthologies was a box set and the second compilation set. It was printed in November 1998 to celebrate the 5th anniversary of Magic. It featured cards from Alpha through Urza's Saga. The print run was unknown.

Unlike Chronicles, but like other box sets such as Battle Royale, the reprinted cards did not count as current product, and thus were only legal in formats which allowed the original cards being reprinted to be used, and were not automatically legal in Standard at the time the product was available.[13][14]

Anthologies had two decks, Green/White and Black/Red, and was printed with and without expansion symbols. The cards had white borders and standard backs.

Battle Royale was a Magic: The Gathering boxed set, the third compilation set, released in November 1999 as a collection of cards emphasizing the multiplayer aspect of the game. Most of the cards included are ones that can affect multiple opponents. This promotion included cards from all different sets that existed previous to it. The cards still retained their original expansion symbols although they were printed with white borders, which was the standard for reprinted Magic: The Gathering cards of 'core sets' until the 2007 release of Tenth Edition. These are the only sets that are printed with white borders (which started with Unlimited.) Another interesting aspect is that colored expansions symbols were added to the cards that didn’t have them previously (namely cards from Tempest, Portal: Second Age, Stronghold and Ice Age.)[13][14] 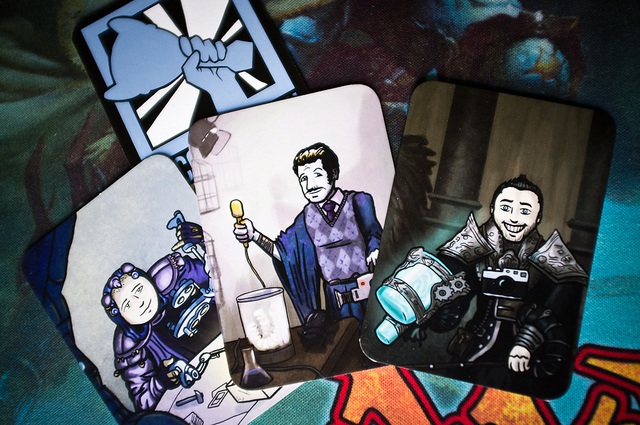 Beatdown is a box set for Magic: The Gathering, and the fourth compilation set. It was not legal in Standard at the time of its release. Beatdown was released as a pair of preconstructed decks combined with accessories, unlike the normal distribution of Magic cards in randomized packs. Alternate art was done for four cards: Sengir Vampire, Erhnam Djinn, Ball Lightning, and Clockwork Beast. The set is white-bordered, and the expansion symbol is a mace. There are no White cards in the set.

The set includes 122 special edition Magic cards divided into two theme decks, Aerodoom and Ground Pounder. The focus of the two decks in the Beatdown box set is to overwhelm your opponent with decks that included some of the more powerful creatures in the game, to that date, such as the aforementioned Erhnam Djinn, Sengir Vampire, Ball Lightning and Clockwork Beast. The Beatdown set was released in October 2000.

Clockwork Avian was misprinted without flying in Beatdown.

Premium Deck Series was a set of preconstructed 60-card Magic: The Gathering decks. All cards were foil and were reprints of cards first printed in other Magic sets.[27] All of the cards are black bordered and tournament legal in their original formats.

In July 2012 at San Diego Comic-Con, Wizards of the Coast announced that the Premium Deck Series would be discontinued after Graveborn.

Duel Decks are a series of boxed sets for Magic: The Gathering, each consisting of a pair of 60-card decks built around a rivalry between two forces, often planeswalkers or creature type 'tribes'. Typically, each deck contains a mythic rare, several rares, and a number of cards with alternate art. Most cards are reprints of cards from previous sets; however, some duel decks contain pre-release cards from unreleased future sets.